Yesterday i took a day off from my job to go practice with my Kona Coilair. My friend Andras came along to show me whats right and wrong with my pedaling. We went to "Crater Mountain" near the city the best place here if you want to practice DH or XC, i mean best place near the city. It was damn hot outside and we did the 13 km to Crater on bikes, with 2.4 tires on....fun i say, not. We arrived at the top of the hill and Andras explained me how to deal with my fear in corners how the handle the brakes to not lose speed. Btw Andras was an ex-cyclist, i mean he was competing in XC races and DH races also, thats why i listen to his advices cause he knows some shit:P. Then we took off..... maaaaaaaaaaaaaaaaaaaaaaaaaaaaaaaaan he was in front off me and a second later he was gone. Well i had to pedal after him. Was a bit scared cause it was my second time on this track so did not so well. The tight corners were my biggest problems and the trees scared the crap out of me. After the first run i explained to Andras what was i afraid of and the sections were i had problems. He explained me the technical part how to turn and also not to lose speed, gave me a short demonstration. We started again, he waited for this time to see if i can handle the track.......well not but i did better on the corners. So far from tuesday on bikes, it was hot outside and we took our asses home. I'll come back and practice more and more, run a lot more to race better.
Next race Medias.
Posted by E.T. at 6/09/2010 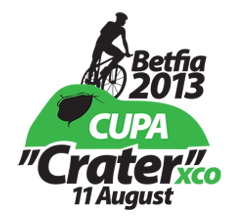